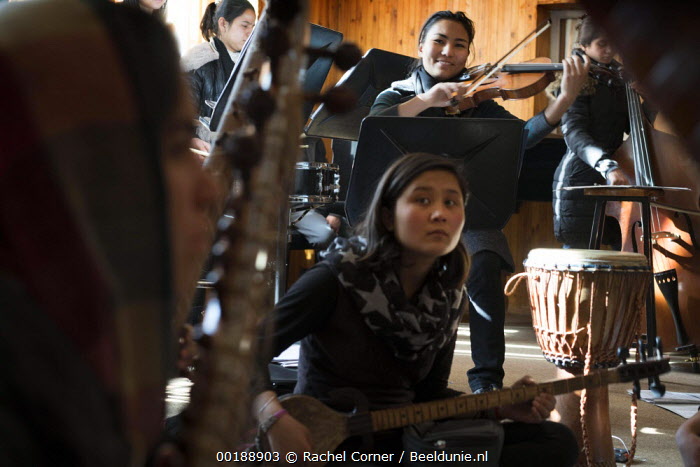 Beschrijving
Zohra is an all girls orchestra in Kabul, Afghanistan. Even thou Afghanistan has a rich music tradition playing music nowadays is not a given, especially for girls. During the Taliban rule from 1999-2001 playing and listen to music was strongly forbidden. Instruments were hidden and many musicians fled the country. In that period the social position of women dropped dramatically and their rights were violated, including not being able to go to school and get educated.
Taliban is not ruling the country anymore but their influence is still present. Also IS is gaining ground. Kabul has become a scared city because of the many bomb attacks killing innocent people.
Dr Armast Sarmast the son of an Afghan composer and conductor was trained as a musicologist and trumpet player. He himself has been a refugee for many years. Now he is the founder and director of the ANIM music school in Kabul. It is a school where boys and girls study together and play music a couple of hours a day and the school of the Zohra orchestra. It consists out of 30 girls ranging from the age of 12 till 20. They play a mix of Western classical and traditional Afghan music. Some of the girls live at home but many live in an orphanage. Not all of them are orphanages but come from poor backgrounds or regions in the country where they have not access to education. Many of their family members do not know that they are musicians because playing music for women is still by many people not accepted and in some views seen that they would disgrace their family.
Creatie datum
11 jan 2017
Credit
Rachel Corner / De Beeldunie
Categorie
#algemeen
Datum online
2 jun 2017
Titel
Zohra orchestra Kabul, Afghanistan
Id
00188903
Onderdeel van
Beschikbaarheid
Wereldwijd
Rechten
Royalty Free Rights Managed
Release
Geen Model release Model release Model release niet van toepassing Geen Property release Property release Property release niet van toepassing
Restricties
Uitsluitend redactioneel Redactioneel Uitsluited commercieel Commercieel Niet beschikbaar in uw land () Er zijn restricties maar het bestand kan wel gedownload worden Downloaden van dit bestand is geblokkeerd Onmiddelijk downloaden is geblokkeerd Niet beschikbaar voor agenten
Beschikbare bestanden
Verberg trefwoorden