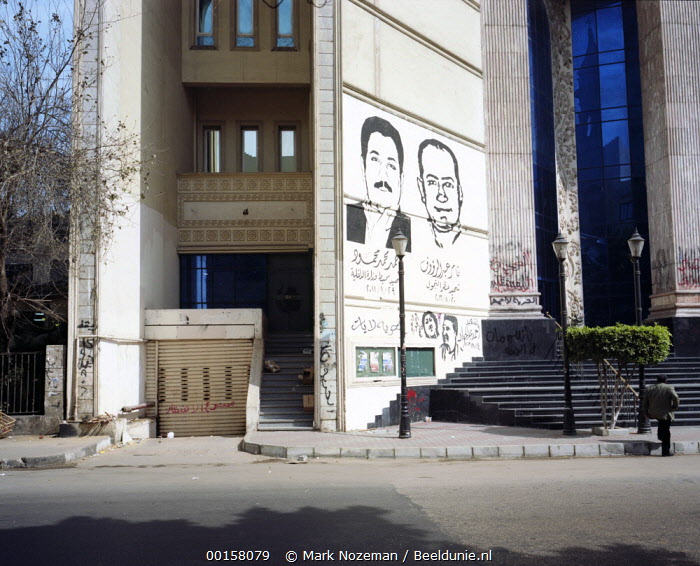 Beschrijving
Photo: Mark Nozeman/ Cairo/ Egypt/Journalist Syndicate Cairo. Journalists have been casualties in Egypt's tumultuous past three years and a target of authorities as part of a broader crackdown on dissent. Dozens of journalists have been jailed, including some from Al-Jazeera, for being seen as sympathetic to the Brotherhood and toppled Islamist President Mohammed Morsi.
/ Serie title:Cairo Under Spell of al-Sisi : 09â4â2014.

The first presidential elections after depose of president Mohamed Morsi in a military-led coup took place in May 2014. The election was held without participation of the Muslim Brotherhood's party which was accused of being a terrorist organisation.After a long bloody en violent period of mass demonstrations the Egyptian authorities and the people want only one thing; peace and stability. During the launch of the election campaign in the first months of 2014 the blockades around the governments seat at the residential area Down Town near Tahrir Square were still there including the military posts and checkpoints. Despite the hope and need of recover of the tourist industry the heightened threat of terrorist attacks against foreigners made tourists stay away. While a massive police force was taken over the streets after their longtime absence the threat of terrorism against the Egyptian state seated in the peopleâs mind and became a theme of the elections. International media was restricted. In May 2014 the candidate of the army, the former general and director of the intelligence military apartment, Abdel Fattah el-Sisi won 97% of the votes. The series of photoâs shows Cairo in the period before the final elections; like in a state of emergency. Weeks before the official candidates of the presidential elections were announced huge bill boards with the portrait of el-Sisi were placed at the streets and squares. While the influences of the Down Town blockades in daily life continuous, remembrance and hope of the (anti-)revolutionary spring were still visible as graffiti on the streets and squares of Down Town Cairo.
Caption writer
Mark Nozeman
Creatie datum
15 apr 2014
Credit
Mark Nozeman / De Beeldunie
Categorie
#reportage
Serie volgorde
NaN
Datum online
24 nov 2016
Id
00158079
Onderdeel van
Beschikbaarheid
Wereldwijd
Rechten
Royalty Free Rights Managed
Release
Geen Model release Model release Model release niet van toepassing Geen Property release Property release Property release niet van toepassing
Restricties
Uitsluitend redactioneel Redactioneel Uitsluited commercieel Commercieel Niet beschikbaar in uw land () Er zijn restricties maar het bestand kan wel gedownload worden Downloaden van dit bestand is geblokkeerd Onmiddelijk downloaden is geblokkeerd Niet beschikbaar voor agenten
Beschikbare bestanden
admin info