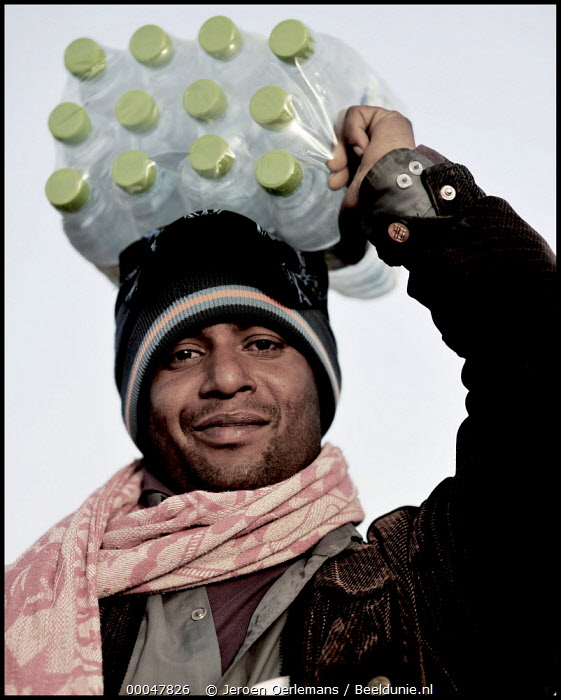 Beschrijving
TUNISIA, RA'S AJDIR, 4 MARCH 2011
A refugee with on his head his last belongings he was able to take from Libya. These Bengali people are work migrants. The harsh circumstances in their country often force them to search for labour in other countries. Global warming is one of the factors that adds to these circumstances.
That there is not much for them back in Bangladesh is illustrated by a tragedy that happened last sunday (6th of march): almost 50 Bangladeshi migrants jumped off a ship that was taking them from Libya to Greece, apparently to avoid being sent back to Bangladesh. Three of them died, 11 are still missing.
These migrants often pay a lot of money (5000 dollar is no exception) to middlemen who promise to bring them to a country where they will be able to work, such as Libya. Once they arrive, often it turns out there is no job waiting for them and they have to try to get work as a day labourer.
Of the bangladeshi migrants I photographed, most had lost all their money when they arrived at the Libyan-Tunisian border. Not only had many if not most of them not received 2 to 3 months of wages, Libyan soldiers and militias robbed them of everything they still had left as well. Money, watches, mobile phones, everything.
The majority of the Bangladeshi I spoke to were working for Korean construction firms in Libya. They claimed their korean managers had also fled to Tunisia, but never ever showed up to to help them in whatever way. The bangladeshi government left them to it as well.
These workers therefor had to sleep rough at the border for about 6 cold nights. In the end, they decided to walk by themselves to the nearest UNHCR-refugee camp, 7 kilometers away. This brought about an exodus of about 30.000 bangladeshi workers.
Photo: Jeroen Oerlemans
Creatie datum
20110304
Credit
Jeroen Oerlemans / De Beeldunie
Categorie
#algemeen
Datum online
30 mar 2015
Object naam
REFUGEE
Id
00047826
Onderdeel van
Beschikbaarheid
Wereldwijd
Rechten
Royalty Free Rights Managed
Release
Geen Model release Model release Model release niet van toepassing Geen Property release Property release Property release niet van toepassing
Restricties
Uitsluitend redactioneel Redactioneel Uitsluited commercieel Commercieel Niet beschikbaar in uw land () Er zijn restricties maar het bestand kan wel gedownload worden Downloaden van dit bestand is geblokkeerd Onmiddelijk downloaden is geblokkeerd Niet beschikbaar voor agenten
Beschikbare bestanden
admin info