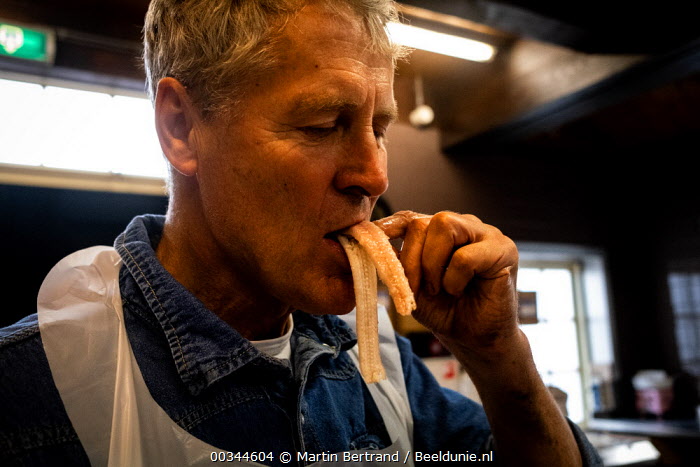 Beschrijving
It is in Volendam, a small port town about thirty kilometres from Amsterdam, that we find Jan Smit in his restaurant and smoking room bearing his family name: Smit Bokkum. In this very famous family business in the Netherlands, fish has been smoked using a traditional method for 150 years and six generations. As he has done every day for 45 years, Jan starts working in the smoking room at dawn. The silence of the early morning reigns and the fire warms up the room. Jan stays by the smokehouse for several hours to control the fire, to dampen it with a little water or to rekindle it. He takes advantage of this time to tell us his story.âIn the beginning, Jan Smit's ancestors only made smoked herring, a great tradition in the Netherlands, but eventually this fish became increasingly rare in the harbour. So they switched to smoked eel, which brought them worldwide fame. People come from all over the world to Volendam to savour this tasty delicacy. These eels are born at a depth of 1, 000 metres in the Sargasso Sea in the Caribbean and then migrate to Europe after a long journey of one year. Sixteen years ago, it was the eels that were finally missing from the Dutch coast. As a result, eels are now only allowed to be fished from May to August. So Jan brings eels from France out of season and has also switched to smoking other fish: salmon, sea bream and sea bass.âNature has often forced the Smit family to renew itself. Jan tells us that because of the many problems with rising water levels in the Netherlands, each generation of his family has had to rebuild the smoking house in a different location. Today, the location of Smit Bokkum is very popular as the restaurant's terrace is considered one of the most beautiful in the country. Nevertheless, for Jan, there is no question of changing smoking methods. "Nowadays, everyone uses machines to smoke. They put the fish in, press a button, and it's done. Here that will never be the case.ÂÂ.âIt's 8:30, the sun comes up, time to start taking the different fish out of the smoking room one after the other. Jan puts on his gloves and, as usual, he rushes into the still-bright fire to take them off. Each time he takes something out of the smokehouse, he takes the opportunity to have a snack. "I'm the best customer here. I eat every day and all the time!ÂÂ. The process then ends in an adjacent room where Jan, accompanied by his sister and two other employees, embark on a long ballet lasting more than an hour and a half during which they skin the many smoked eels that will then be taken to the restaurant kitchen or to their small shop in trays.
Then comes lunch time. Between visitors and regulars, the restaurant is full. Jan, proud of his work, wanders from table to table to chat with the customers who compliment him.
Câest à Volendam, une petite localit portuaire à une trentaine de kilomètres dâAmsterdam, que nous retrouvons Jan Smit dans son restaurant et son fumoir portant le nom de sa famille : Smit Bokkum. D
Caption writer
Photographer
Creatie datum
25 okt 2019
Credit
Martin Bertrand / De Beeldunie
Categorie
#algemeen
Datum online
2 apr 2020
Titel
NETHERLANDS - FOODING -SMIT BOKKUM
Object naam
NETHERLANDS - FOODING -SMIT BOKKUM
Id
00344604
Onderdeel van
Beschikbaarheid
Alleen inNetherlands
Rechten
Royalty Free Rights Managed
Release
Geen Model release Model release Model release niet van toepassing Geen Property release Property release Property release niet van toepassing
Restricties
Uitsluitend redactioneel Redactioneel Uitsluited commercieel Commercieel Niet beschikbaar in uw land () Er zijn restricties maar het bestand kan wel gedownload worden Downloaden van dit bestand is geblokkeerd Onmiddelijk downloaden is geblokkeerd Niet beschikbaar voor agenten
Beschikbare bestanden
admin info